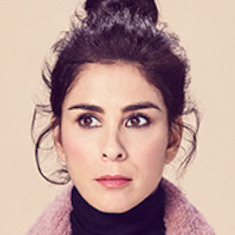 Sarah Silverman: Grow Some Lips! Kicks off in DENVER!

To participate in future presale opportunities sign up for our weekly emails - JOIN NOW.

She currently hosts her weekly podcast, the critically acclaimed The Sarah Silverman Podcast. She can next be seen as the host of TBS’ Stupid Pet Tricks, an expansion of the famous David Letterman late night segment. Silverman previously hosted the Emmy and Writers Guild-nominated Hulu series I Love You, America. She continues to lend her voice to several animated series, including Bob’s Burgers.

On stage, Silverman continues to cement her status as a force in stand-up comedy. Her latest stand-up special, A Speck of Dust, released on Netflix, culminated two Emmy Award nominations and a Grammy Award nomination. In the film world, Silverman was most recently seen in the critically-acclaimed film Battle of the Sexes. She also starred in I Smile Back, the film adaptation of the Amy Koppelman novel. Silverman also lent her voice as “Vanellope” in the Oscar-nominated smash hit Wreck It Ralph and Golden Globe-nominated Wreck it Ralph 2: Ralph Breaks the Internet.

Silverman was nominated for a 2009 Primetime Emmy Award for “Outstanding Lead Actress in a Comedy Series” for portraying a fictionalized version of herself in her Comedy Central series, The Sarah Silverman Program. This marked Comedy Central’s first-ever Emmy nomination in a scripted acting category.

Silverman has made memorable guest appearances on several acclaimed and notable television shows, including Monk, which earned her a 2008 Primetime Emmy Awards nomination for “Outstanding Guest Actress in a Comedy Series.” Her additional television work includes buzzed-about roles on HBO’s Crashing, Masters of Sex, The Good Wife, The Larry Sanders Show, Seinfeld, and Mr. Show with Bob and David.