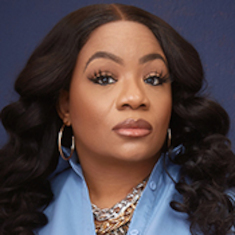 Patricia Williams (aka Ms. Pat) is a comedian, author, podcaster, and actress who brings a raw, in your face, and hilarious perspective to her work.

On August 12, 2021, Pat’s multi-cam sitcom The Ms. Pat Show premiered on BET+. Based on her own life, the show tells the story of a former convicted felon turned suburban mom (Ms. Pat), whose hustle and resilient spirit was forged on the streets of Atlanta. To much reserve, she and her family now find themselves in conservative middle America.

In September 2021, Pat returned to her hometown of Atlanta to tape her first hour standup special, which will premiere on Netflix this year.

In 2017, she published her memoir Rabbit with Harper Collins. The book chronicles her incredible and moving story: by the age of 15, and known by her street name “Rabbit,” Pat was a single mother of two selling crack in the inner city of Atlanta. At 19, with two toddlers and a new husband, she was handed 4 more young children from her sister who was struggling with drug addiction. With her husband’s help and encouragement, she finally decided to get on the straight and narrow, and on the encouragement of her case-worker, she went to her first open-mic.

In 2019 she was hailed by Variety as a “Top 10 Comics to Watch.” She has appeared on Netflix’s The Degenerates and Larry Charles’ Dangerous World of Comedy, Comedy Central’s This Is Not Happening, NBC’s Last Comic Standing, and Nickelodeon’s Mom’s Night Out. Pat is a regular on The Breakfast Club, and she has become a podcast celebrity with multiple appearances on WTF with Marc Maron, The Joe Rogan Experience, and The Bertcast with Bert Kreischer. She now hosts her own popular podcast The Patdown.

As of Wednesday, April 13, 2022, Comedy Works will be using YONDR to lock up cell phones and smart watches during shows at both of our locations.

To expedite the process we strongly advise you to leave your cell phone & smart watch at home or in the car. Otherwise, you will be asked to lock up your phone using Yondr. Attendees maintain possession of their devices and are now free to enjoy the experience without distraction.