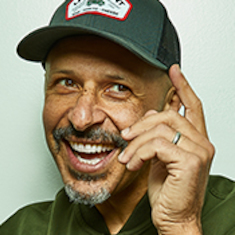 Maz Jobrani is a comedian, actor and host of his own podcast, Back To School With Maz Jobrani on the All Things Comedy Network. His new stand-up comedy special Pandemic Warrior is now available for streaming on PeacockTV.

As an actor, he was most recently seen starring in the CBS sitcom Superior Donuts. He has made appearances on TV’s most popular shows including Grey’s Anatomy, Curb Your Enthusiasm, Better Off Ted, and Shameless. He has also been a regular guest on The Late Show with Stephen Colbert and The Late Late Show with James Corden. He starred as the title character in the award-winning indie comedy, Jimmy Vestvood: Amerikan Hero, a film which he co-wrote and co-produced. He has co-starred in many films including Sydney Pollack's The Interpreter, Disney's Descendants, and Ice Cube's Friday After Next.

Maz’s other stand-up comedy specials include Immigrant, which was filmed at the Kennedy Center and is a Netflix original, as well as three additional solo specials on Showtime Brown and Friendly, I Come in Peace, and I’m Not a Terrorist, But I’ve Played One on TV.

Maz was a founding member of The Axis of Evil Comedy Tour, which aired on Comedy Central. He is a regular panelist on NPR’s Wait Wait Dont Tell Me and has given two TED Talks. Maz published an LA Times Best Selling Book, I’m Not A Terrorist But I’ve Played One On TV, as well as executive produced, Everything Must Change, a documentary about his sister's battle with breast cancer.

FACE MASKS ARE REQUIRED upon entering & when moving through the building for ALL SHOWS.

Effective Sept 30, 2021 and beyond
PROOF OF VACCINATION REQUIRED for these shows.

- We will no longer be accepting negative test results as an alternative.*
- Photos or digital copies of vaccination cards are acceptable.      - *Any patron needing an exemption due to a medical condition, disability or religious belief will need to Download Patron Vaccination Exemption Form and bring the signed complete form along with a proof of a negative COVID test taken no more than 72 hours prior to entry.


Our vaccination policy is subject to change. Please review our Safety Protocol.