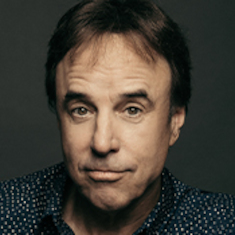 Kevin Nealon sets himself apart from other comedic performers with his unique sense of humor, dry wit and likeable demeanor. Nealon is best known for his nine-year stint as a cast member of NBC’s Saturday Night Live, and has received critical acclaim for his role in the Showtime series, Weeds. Kevin is currently seen as one of the stars on the CBS-TV comedy series Man With A Plan.

Nealon has found great comedic success in his extensive film career. Kevin has starred in over two-dozen comedies, including Happy Gilmore and The Wedding Singer both with Adam Sandler, Anger Management with Jack Nicholson, Daddy Day Care with Eddie Murphy, Joe Dirt, Get Smart, Grandma’s Boy and Just Go With It starring Adam Sandler, Jennifer Aniston and Nicole Kidman. Kevin also starred recently with Sandler and Drew Barrymore in Blended.

A sought-after guest star on television, Kevin has made a number of appearances on Hot In Cleveland, Franklin & Bash, Monk, Fat Actress, Curb Your Enthusiasm and Still Standing. Kevin provided the voice for the stop-motion animated series Glenn Martin DDS on Nick at Nite. Recently, Nealon hosted TBS’s Funniest Commercials of the Year for the fifth time. Previously, Kevin hosted the AOL series Laugh Lessons With Kevin Nealon.

Nealon now has two comedy specials, Now Hear Me Out and Whelmed But Not Overly, both available on DVD and CD. His book entitled Yes, You’re Pregnant But What About Me? - a comical look at the male perspective of pregnancy is available in bookstores.

FACE MASKS ARE REQUIRED upon entering & when moving through the building for ALL SHOWS.

Effective Sept 30, 2021 and beyond
PROOF OF VACCINATION REQUIRED for these shows.

- We will no longer be accepting negative test results as an alternative.*
- Photos or digital copies of vaccination cards are acceptable.      - *Any patron needing an exemption due to a medical condition, disability or religious belief will need to Download Patron Vaccination Exemption Form and bring the signed complete form along with a proof of a negative COVID test taken no more than 72 hours prior to entry.


Our vaccination policy is subject to change. Please review our Safety Protocol.