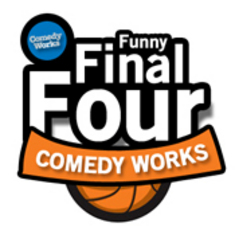 The Funny Final Four is a series of competitions starting with 5 teams made up of a captain, twelve New Talent comics, two alternates, and one National Touring Headliner.

Every show, a different team will perform the funniest, most original show they can produce. (One year, one team did a Price is Right themed show.) And the judges are selected from the audience!

Each team will be judged, and the top two teams move on to perform again, with the winner getting a third show. Look for some of your favorite local comedians!