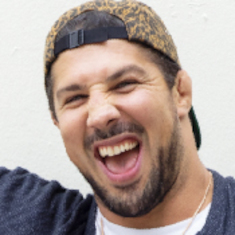 For the live show audience members, please help us keep our staff and customers safe by following these new guidelines:


If you are joining another party (up to 4), please add their name in the NOTES section so we may seat you together.

Brendan Schaub is an American stand-up comic, podcast host, and TV personality, best known for his career in professional sports – with both the UFC and NFL.

Schaub currently co-hosts two hit podcasts with his best friends/fellow comedians. He began his podcast career with the hit show The Fighter and the Kid along side MadTV’s very own Bryan Callen. Together they created a hit show that garners over 10 million downloads a month. The podcast quickly acquired a cult following by consistently being a staple in the top 5 rankings on iTunes under the sports/comedy category for the last five years. Schaub recently developed his newest hit podcast, King and the Sting, in collaboration with his good friend and stand-up comic Theo Von. The show has skyrocketed to a level of unprecedented popularity by debuting as the #1 podcast in the world on iTunes its premiere episode. Below the Belt is Schaub’s third show within his podcast empire that he hosts by himself, which is the #1 combat podcast in the world. Below the Belt is consistently in the top 5 iTunes rankings for the sports/comedy category and debuted as the 2nd largest podcast in the world.

The Fighter and the Kid podcast eventually led Schaub to fulfill his childhood dream of being a stand-up comic. In 2018, Schaub travelled around the world for his Stay in Your Lane tour with sold out shows in Australia, London, Ireland, Canada, and all over the United States from LA to New York. After two years of headlining sold out shows worldwide Schaub recorded his first one-hour comedy special, You’d Be Surprised, with Showtime in January 2019. In addition to his successful career in comedy Schaub is also on Bravo’s Play by Play, E!’s After Party, Showtime’s Below the Belt, Comedy Central’s 7th season of This is Not Happening, David Ayer’s upcoming film Tax Collector, and Joe Rogan’s Fight Companion podcast.

*VIP TICKETS include priority seating, PLUS a post-show Meet & Greet with a photo opportunity!

HERE’S WHAT WE’RE DOING TO KEEP OUR STAFF, CUSTOMERS, AND COMICS HEALTHY:

- Customers will be asked to keep a minimum of 6' between groups while waiting in line to enter the showroom and for the bathrooms.
- Six-foot social distancing markers will be displayed throughout common areas.
- Hand sanitizer stations are located at club entrances and throughout the venue. We do however recommend customers to come with their own.
- The capacity of each show has been reduced to allow for safe social distancing inside the showroom.
- All customers will be seated by a host at tables of no more than 4 people and will selectively seat people throughout the club. No one will be sat with guests that are not in their own party.
- Staff members who have been sick, may have been exposed to positive COVID-19 individuals, or who are not feeling well will not be permitted onsite.
- All high touch surfaces including (but not limited to) tables, chairs, doorknobs, faucets, bathrooms, and more have been sanitized and will continue to be disinfected throughout the evening.
- All staff members will be wearing masks for your safety and theirs.
- Customers are required to wear masks during the entering and exiting of the club, while they wait to be seated, and while using the restroom. However, a mask is not required when customers are eating and drinking at their table.
- Customers will be able to order food and beverage from their showroom server.
- If you or anyone in your group is feeling unwell or feels it is best not to attend the show, please email Mackenzie@comedyworks.com for a full refund.
- We are abiding by all health advisories given by local authorities to provide a safe and healthy venue so our customers can relax while enjoying great live stand-up comedy. See you soon!

Should you have any questions, please email us at question@comedyworks.com. You can also subscribe here for our notifications. We are only keeping our distance for now. Be safe and smart and this will all be over soon.