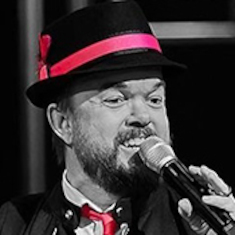 Williams has parlayed that success into a multitude of stand-up television experiences, including Live at Gotham, The Tonight Show, Dave Attell’s Comedy Underground, and Jimmy Kimmel Live. His first one-hour special, Fun Size, was the highest rated on Showtime, and a year later, he followed that up with his second special, Daddy Issues. Most recently, Williams recorded a new half-hour special for Netflix’s upcoming stand-up comedy showcase The Degenerates.

An accomplished actor, Williams has appeared on numerous TV shows, including FX’s Legit, Sam and Cat, Mind of Mencia, Pitboss, and a recurring role on the Hulu original show Deadbeat. He has also had memorable roles in a plethora of movies, including Little Evil and the Netflix original Christopher Guest film, Mascots.

In addition to stand-up and acting, Williams has become a dynamic on-air personality. His podcast with Adam Ray, About Last Night, is a mainstay on the iTunes charts. He is also a regular contributor on KROQ’s Kevin and Bean Show in LA, as well as Adam Carolla’s podcast, The Adam Carolla Show.

Brad’s ability to make humorous and inspiring observations on disability, relationships, sex, and race are consistently winning over audiences and proving anyone can overcome their shortcomings.